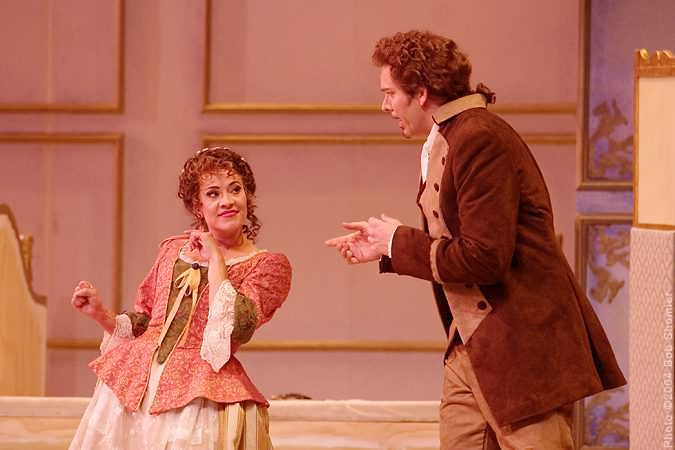 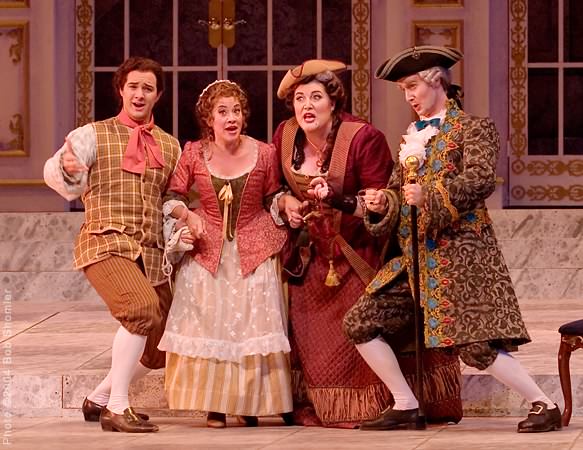 Aimee Puentes was a firecracker as the fickle innkeeper Lisa. A kind of cross between Sofia Loren and Lucille Ball, the soprano combined sensuous tone with goofy faces and slapstick antics (even singing from a supine position at one point). She put her powerful instrument to comedic use, emitting shriek-like high notes during her character’s frustrated diva tantrums. - Joe Cadagin, San Francisco Classical Voice

The standout among the three woman was Aimee Puentes as Zerlina, her singing clear and pointed and her stage demeanor winningly direct; her pristine, unfussy rendition of “Batti, Batti” may have been the evening’s high point. - Joshua Kosman, San Francisco Chronicle

Which brings us to Aimee Puentes as Susanna. Saucy, pert and with a clear soprano voice, Aimee was Susanna – the lady’s maid with a keen sense of her own worth. Every mood was clearly reflected in her mobile face. - Philip G Hodge,  in sanfranciscosplash.com

The cast is uniformly fine, with exceptional support from soprano Aimee Puentes as impish pageboy Oscar (who at one point leaps into the arms of startled Renato). - Ken Bullock, Berkeley Daily Planet

Soprano Aimee Puentes sang with animation in a rich, true voice with controlled vibrato. “In trutinamentis dubia” (in the uncertain balance of my mind) flowed with lyrical grace. Her “Dulcissime, totam tibi subdo me!” (sweetest one! Ah! I give myself to you totally!) soared and rippled with passion, as her expression of joy enhanced the performance. - Phyllis Rosenblum, Santa Cruz Sentinel

Puentes conveyed her charms with a clear, soaring soprano (and shimmering silver gown), seducing any holdouts with the gorgeous, submissive “In trutina”. - Scott MacClelland, Metroactive Music